June 2022 Whether we or our politicians know it or not, Nature is party to all our deals and decisions, and she has more votes, a longer memory, and a sterner sense of justice than we do. – Wendell Berry
Friends, family, pets, art, music, books and Nature are what sustain us -- I continue to rebuild this website as well as make art, work on my book about Women and Tech (primary project currently), rebuild my hit podcast, Light 1.0, develop story-music short performance pieces. Still studying DADGAD celtic guitar and playing duets with videos of other players on YouTube for practice! I taught Spring term in computer science department of a local college, for the 6th term online due to pandemic – hard to believe. We need to get back to the classroom, and I will write more about that soon.

Currently I'm creating music for a creative nonfiction hybrid memoir-history book about women and technology (and me), and Light 2.0 - an interactive multimedia iBook (the next version of my podcast novel, Light 1.0. In the meantime here is some music for your enjoyment:

A clip from my Tea Gypsy CD of Manha de Carnaval.

And a mash-up clip (shh!) of me singing with Chet Atkins and Les Paul: Moonglow.

The oak above and the musicians below are all examples of my new technique of creating plates in the computer, then pulling monotype prints manually with non-toxic inks and a print technique I learned at the Armory in Pasadena which does not necessitate a printing press! 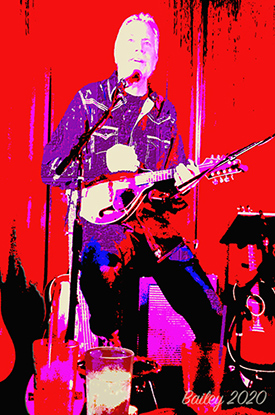 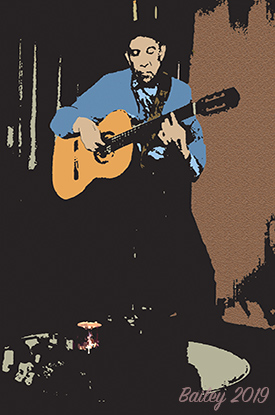 Two of my digital paintings, September and February, from my Landscape Series, are published in the Winter, 2nd Edition, of the Drowning Gull Literary Magazine. I am also very happy because I recommended my best artist friend, Joe Norton, to them, and they published one of his digital paintings also. In this issue the essays, stories and art are all on the subject of Nature 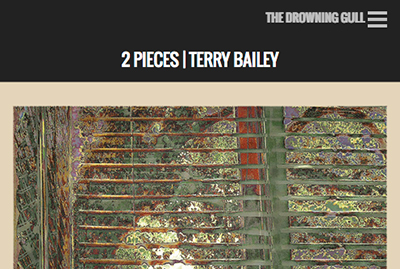 Here is a link to the images on magazine site:

I've performed my new Sunday At Buster's Reading Baldwin story and music, and a poem I wrote to a bossa nova, Sometimes I Wish I Lived in a Movie – with some hip hop artists at their poetry slam, at Coffee Gallery Backstage, at a few house concerts in Pasadena and Monterey, and at a Berkeley Opera workshop gathering. My new performance "thing." More performances tba when we all get to go outside again. 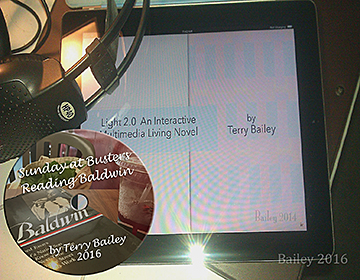 
More Digital Painting – and About the Artist

Ice Tea, Giclée print on watercolor paper, 30.5" by 39" more about this painting . . . San Francisco native, Terry Bailey completed a BA degree in Film at San Francisco State University, and later studied fine art, design, theater, computer science and multimedia at several colleges before earning an MFA in Interactive Writing / Creative Nonfiction at Antioch University. A pioneer in the fields of interactive multimedia, digital painting and interactive book authoring, Terry has provided creative vision and inspired innovation with cutting edge media, arts, literary and design technologies in a wide range of academic, scientific, creative and corporate settings. Her digital paintings have been shown and reviewed in numerous juried exhibits including the Center for Contemporary Art in Sacramento, Siggraph, The Disney Gallery at Marlboro School, Poway Center for the Performing Arts, the Brand Library Gallery in Glendale and Long Beach Arts.

Bailey's digital portraits and landscape paintings demonstrate her deep roots in oil painting, drawing, art history and, especially, film. The content of her paintings is often reminiscent of a film tableau, and Terry likens them to painted one-frame movie scenes. Says Bailey regarding her work as a digital artist, “My brain does not know the difference between my holding a sable paint-laden brush or a computer stylus; in either case I am painting a picture, telling a story. But, for me, my visual vocabulary is greater working digitally because there are more options.” Terry is currently painting a series of landscapes based on the calendar months, and another of local musicians. 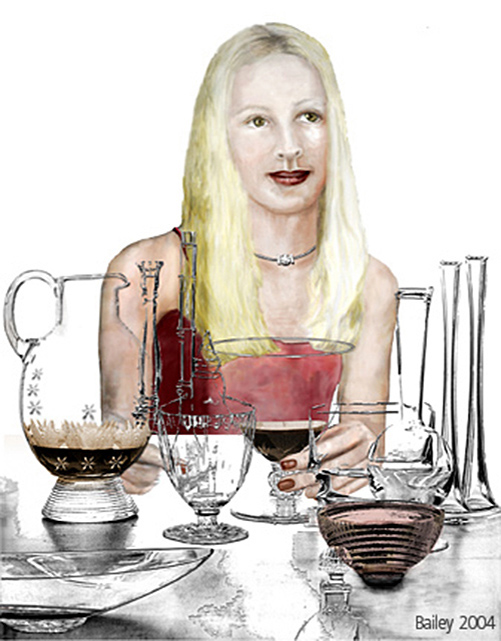 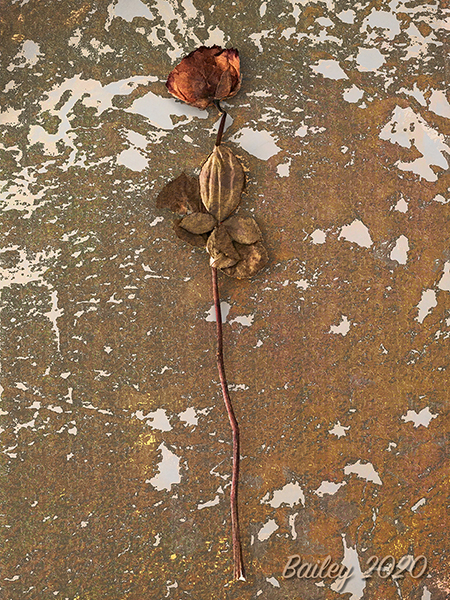 
$250 billion
in direct payments to individuals and families

$500 billion
in loans for distressed companies

investments from Treasury
necessity
hit by job loss
help impacted American workers (read: "consumers")
and families (read: "consumers")
as well as small businesses
and major industries
including airlines
worker-friendly
chief economic advisor:
main street assistance
needed to
bolster the economy
provide cash injections
liquidity
stabilize financial markets
difficult period in the economy
grinding economy to a halt
loans to distressed companies
unemployment benefits
self-employed workers
small business administration
guarantor for loans
small businesses
maintain payrolls
pay off debts
hard-hit
closing out the deal
safeguards for American workers
unemployment insurance on steroids
art of compromise
offset the economic damage
emerging deal
a win
delivers huge progress .
∞
She is drinking again
because she can't get to AA.
She fears a beating
cooped up indefinitely
with a batterer who is
usually triggered by stress.
She's pregnant
and we fear for her unborn.
She is homeless,
hasn't read a paper in months,
but hears rumors.
She was isolated
And depressed
before this pandemic.
What should she
tell her children?
She was about to be married.
She was about to graduate.
She was about to have a birthday party.
She has a dying mother
on the other coast.
Her computer doesn't have
a microphone or video camera in it.
She doesn't have
a smart phone
Should she wash
every fruit and vegetable
before she feeds it
to her children?
For how many seconds?
She answered her niece's question:
"Oh, no, I think this is much worse
than World War II"
but didn't elaborate
because her food tray had arrived.
If the hospitals
Are on overload
Should she ignore
that pain in her heart?
On her walk yesterday
she wondered if
street cleaning
and street cleaning tickets
will be suspended
for the duration
and noted that the trees
and birds
don't miss us
or our economy. 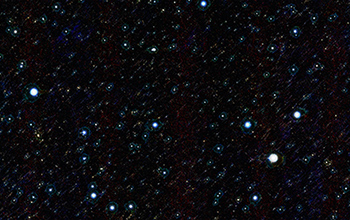 Terry Bailey has written a Web book, Amy Beach and Me (see below), and a podcast novel, Light 1.0 – which was a "hit" on iTunes for ten plus years after its initial publication in 2005. She is now at work on a hybrid creative nonfiction - memoir about women and technology.

Amy Beach and Me - is an interactive multimedia web-base biography and memoir about one of the first women composers in U.S. – and Terry. This interactive multimedia book was begun as Terry's MFA thesis. While exploring the life of Amy Beach, the book draws comparisons between the lives of women artists living a century apart.
I still have this web-based book online, but, sadly, the internet no longer supports Flash, and most of the animations, music, buttons, i.e. Interactivity, were built in Flash. Click the image to find the web-book prototype online - but sans the music and animatons for now. I am considering whether or not I should try to rebuild them in html . . . 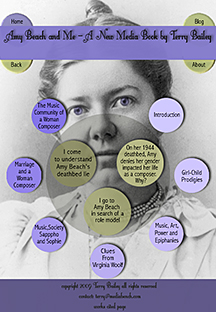 Amy Beach and Me, Web-Based Book